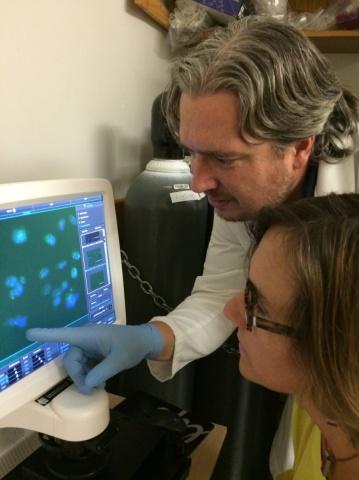 New research from Duke University has found that ritonavir, an FDA-approved medication currently used to treat HIV, corrects multiple brain abnormalities associated with a mouse model of a genetic form of dystonia. The study was published in the August issue of Science Translational Medicine.

The preclinical findings are especially promising because of the major unmet need for therapies for dystonia. Ritanovir produced lasting, widespread improvements in brains of mice that model the condition. Existing therapies may reduce the severity of symptoms but are limited by side effects, and certain individuals may only gain benefit through invasive procedures. There are no disease-modifying therapies for dystonia.

“We were really struck by the range of abnormalities that the drug was effective against, giving us hope that it may be acting close to the root cause of the problem,” said Nicole Calakos, MD, PhD, Lincoln Financial Group Distinguished Professor of Neurobiology and Neurology and the senior author of the study. “The fact that the brain MRI findings showed lasting correction months after a brief treatment is also intriguing because it raises the possibility that regular ongoing treatment might not be necessary.”

Calakos and colleagues used a cell-based screening assay they developed to examine more than 1500 FDA-approved medications for the potential to correct cellular and brain abnormalities associated with dystonia. Further analysis of the 18 medications identified as candidates found that ritonavir had the greatest potential.

When they applied ritonavir to brain tissue from mice with the DYT1 gene, they found that within hours it corrected abnormal firing of an acetylcholine-releasing neuron that is thought to underlie the efficacy of current anti-cholinergic medicines used for dystonia. In a second experiment, mice that received the drug daily for two weeks as juveniles were imaged by brain MRI in adulthood. Unlike DYT1 mice that didn’t receive the drug, mice with the disorder that received ritonavir showed widespread correction and couldn’t be distinguished from healthy control mice.

Dystonia is a movement disorder that causes muscle contractions that force certain parts of the body into abnormal, sometimes painful, movements or postures. Depending on the individual and the type of dystonia, symptoms may be localized to a specific region, spread throughout the body, or be associated with a specific task such as playing a musical instrument.

Further safety and efficacy testing is needed before we will know whether these preclinical studies can help people with dystonia. While ritonavir is an FDA-approved medication, it has not been tested for safety at the levels Calakos’ team used in their research. Additionally, new methods are likely necessary for ritonavir to reach the high levels that will be necessary in the brain, since the blood-brain barrier filters most compounds, including ritonavir, from entering the brain. Alternatively, the team’s knowledge of ritonavir’s mechanism of action may be used to develop an analogue compound with the capacity to do so.

“We still have yet to know if this will fix dystonia in patients, but this work gives us much enthusiasm, both for ritonavir and for establishing that other FDA-approved compounds might be able to help people in new ways,” said Zachary Caffall, MS, a research scientist in the Calakos lab and first author of the study. “We’re very excited about the opportunity this research opens up to offer people with dystonia a potentially disease-modifying option.”

The study was 8 years in the making and involved interdisciplinary teams of scientists from Duke, the NIH National Center for Advancing Translational Sciences and the University of Florida. It was seeded by money from Tyler’s Hope for a Dystonia Cure, a Gainesville-based foundation formed by a family affected with the disease, and ultimately gained larger grants to carry it to completion.

“This work is a great example of researchers collaborating and breaking down some of the barriers that have historically impeded progress by being siloed,” said Rick Staab, co-founder of Tyler’s Hope for a Dystonia Cure. “This is an exciting breakthrough and although there are more steps to go, I believe these findings will prove to have a huge impact on our quest to provide better treatments and ultimately find a cure for this devastating disorder.”