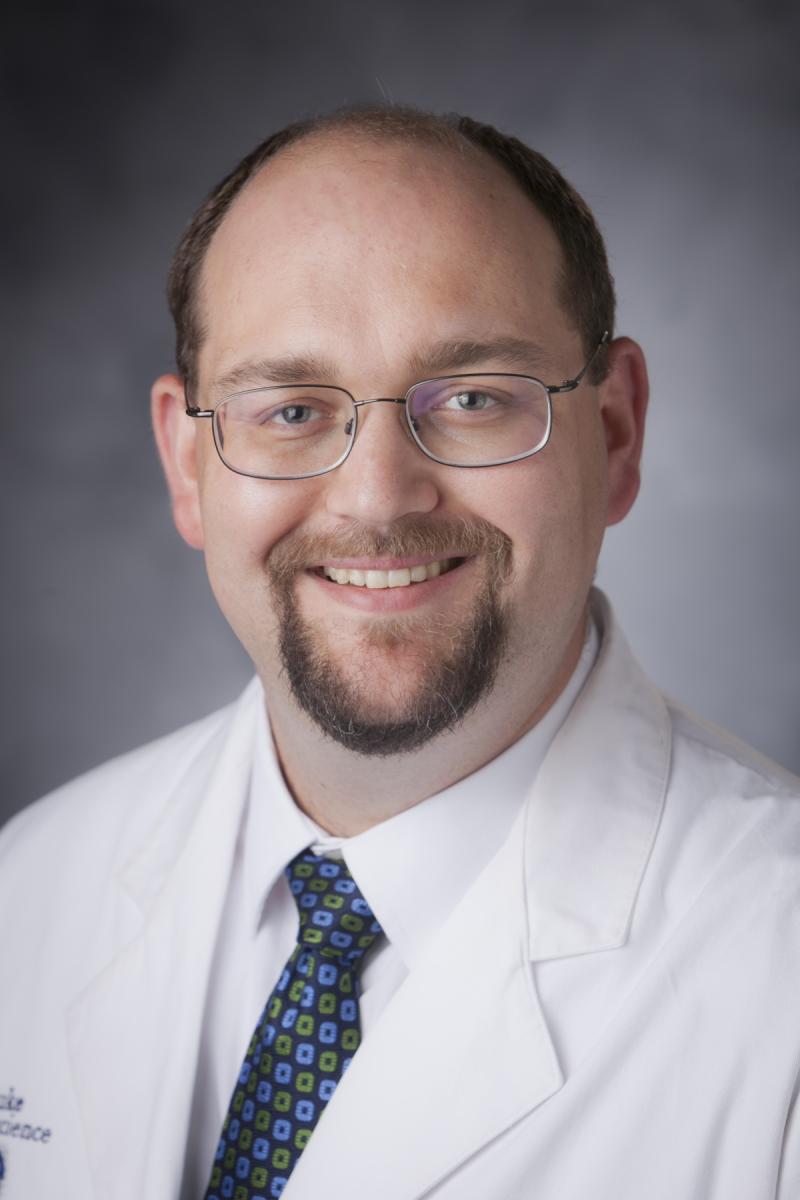 Throughout history, men have had, and continue to have, enormous benefits compared to women in the field of medicine. Women were literally not allowed to practice medicine for centuries, and continue to face discrimination as providers and patients. Yet even as the study of the political, biological, social and other factors that uniquely affect women's health has blossomed into over the past 50 years, the corresponding study of men's health has only recently gained attention. For June, which is Men’s Health Month, we’re debuting a new interview series that we hope helps to change that balance. For our first entry, Matt Luedke, MD talks to us about issues distinctly relevant to men regarding epilepsy.

These differences range from the population level, such as a small but significant increased risk for men, to the biological, such as differences in response to medication, to the social and economic, such as how concerns about seizures can affect men’s livelihoods and hobbies. Along the way, Luedke busts myths regarding men’s medication habits and offers tips about how men can work with their provider to make decisions that work best for them.

How much of a health concern is epilepsy for men? Are there any ways that the symptoms, response to therapy, or epidemiology of epilepsy differs for men compared to women?
While it can vary from place to place and from study to study, men are a little more likely than women to develop epilepsy in the course of a lifetime. To put this into context, according to one review, if you filled Texas Memorial Stadium, home of the Texas Longhorns football team, and filled to capacity (about 100,000 fans) with randomly selected men, about 51 of them would have epilepsy. If you filled it with randomly selected women, about 46 would have epilepsy. It’s not a huge difference, but it’s there.

Men also tend to be a little more vulnerable to focal epilepsy than women (seizures that start in a specific spot on the brain, rather than on both sides at once). This is probably related to the fact that men are usually more vulnerable to brain injuries; they tend to work more dangerous jobs and have higher rates of tobacco and alcohol use. There are some genetic epilepsies which can be more likely to affect men and some that are more likely to affect women, but that’s a relatively small number relative to the majority of people with epilepsy.

Women and men generally respond the same to medications in terms of how they affect the seizures, but the side effects can differ. For example, some seizure medications like valproic acid and topiramate can cause birth defects, and others, like carbamazepine or phenytoin, can reduce the efficacy of birth control. These are important issues, but tend to overshadow important issues in men’s health. For example, some anticonvulsants can have complex effects on testosterone levels, cause sperm motility issues, and can lead to erectile dysfunction. In one series, as many as 57% of men with epilepsy can have erectile dysfunction, around 5-10 times that of the general population.

The risks of sudden unexpected death in epilepsy (a situation where a person can stop breathing and lose a pulse during seizures, leading to death) are also a little higher in men and they tend to be more likely to have status epilepticus (a seizure that does not stop on its own). Why isn’t clear, but part of it may be due to the fact that men tend not to take their medications as regularly as women. This can lead to problems with keeping seizures under control and keeping severe seizures at bay.

What kinds of treatments are currently available for epilepsy? How much of a difference do they make in an a man’s (or woman’s) ability to live a happy, productive life?
In general, there are three strategies for treating seizures. The mainstay is medication. There are dozens of seizure medications out there right now, and every patient responds to them differently. In some ways, men have a little more leeway in terms of what seizure medications they can safely take, since men do not take birth control and they do not bare children. But, as above, they can have some sex-specific side effects, for which they need to be aware.

The other methods are a ketogenic diet and surgery. Ketogenic diet, for some patients, can be really beneficial, but it is not a front-line therapy, and it can be very difficult to maintain. Surgery may be considered for patients that do not respond to medications, and can consist of implanted devices to reduce seizure risks, or brain surgery that can cut out or isolate the source of seizures. But, the majority of people with epilepsy (around 60-70%) will achieve control of their seizures on medicines alone. Regardless of how people respond to therapy, they should work with their physician to improve their quality of life. Controlling seizures is important, but it is not the only predictor of life satisfaction in patients with epilepsy, and if you are seizure free but still struggling with side effects, depression, difficulty finding work, or other challenges related to your seizures, you need to talk with your healthcare team to consider other factors in your care beyond just your seizure frequency.

Men with epilepsy are generally less likely than women to be compliant with therapy for epilepsy. What are the reasons for this, and what kinds of health effects does this have?
There are a lot of guesses about this, but I don’t know if there’s a clear answer. In fact, while male adherence tends to be less in epilepsy, it’s not consistent, and it’s not the same in other fields of medicine. You can make hypotheses based off of vague generalizations about gender stereotypes of personality and culture, but I don’t think it does the situation justice.

In the end, it’s a patient-by-patient issue. Some people just don’t like taking medicines. If you’re one of those people, then working with your physician to come up with a strategy to minimize the number of medications may make tolerating the few you really need easier. For others, it may be an issue of not liking a side effect. If you don’t like a given side effect, be up front about it and ask if there is an alternative medicine. Regardless, the key is to be honest with your physician if you aren’t taking a medication they prescribed, and why you’re not taking it. If you don’t tell your doctor, they might make decisions about how to manage your seizures based off of the false assurance that you’re on the medication prescribed.

Many men also have concerns about epilepsy affecting their activities they enjoy or that are part of their livelihood, from driving, to performing physical labor, to playing sports. How much does epilepsy affect a person’s ability to perform these kinds of activities?

Epilepsy can present a real socioeconomic challenge. First, if you have a seizure that causes you to lose consciousness or would impair your ability to drive, most states prevent you from driving. The rules differ from state to state, and driving restrictions can last between 3-12 months after a seizure depending on the state. Be aware of your local laws, and please, adhere to them. Driving when you shouldn’t puts you and those around you at a risk of injury, along with legal and financial jeopardy if you get into an accident.

Beyond driving, seizures can present problems for employment. DOT-licensed over-the-road truck drivers and pilots face rigorous health monitoring, and will likely be unable to continue in those lines of work. People who drive cars or heavy machinery, climb, or work in very dangerous environments will also have trouble continuing their work until they achieve sustained seizure freedom. Beyond that, jobs become more manageable. Most professions, technical, and administrative jobs are safe environments to work, even if seizure control isn’t perfect. I know excellent physicians, attorneys, business people, and teachers who continued to work despite lapses in seizure control.

Recreational activities might need to be curtailed. Some activities, like SCUBA and skydiving are probably permanent no-gos, for example. Other activities like swimming, kayaking, and climbing should be avoided, at the very least until a patient has demonstrated sustained seizure freedom.

I tend to tell my patients that if the state says it’s okay for you to resume driving, that means you’re safe enough to drive a 3000 lb projectile at 70mph. If you’re willing to risk driving a 3000 lb projectile at 70mph, then it’s silly for me to say you absolutely can’t swim, kayak, or climb. That said, driving for most people is a near necessity. When it comes to recreational activities, one needs to ask, “Is this so important to me that I’d risk doing it and having a seizure?” For example, I am an avid, if incompetent, fly fisherman. That means I sometimes wade hip-deep in running water. If I were to have a seizure during that, unless it was a very mild event, there is a good chance I would drown. If I were to develop epilepsy, even if I got it under control, I would strongly consider giving up wading streams. Would I have to quit fishing? No; I’d probably fish from boats or shore lines, and in the company of friends. It can be challenging, but trying to find alternatives or variants of hobbies or recreational activities can “keep you in the game,” even if it’s not quite the way you used to do it.

I’m often asked about exercise. I strongly encourage my patients to be active, but to exercise some caution when they exercise their bodies. Body-weight exercises like calisthenics, yoga, or pilates can be very effective for fitness and are pretty safe. Weight lifting, particularly free weights, could be dangerous, even if you have a really good spotter. Running is great, but at least early on, bicycling (especially on busy streets) is probably not a good idea. If you like exercise machines, you might want to consider avoiding treadmills, as a fall on the moving belt could turn into a pretty catastrophic event. A seizure on a stationary bike or even an elliptical jogger would probably hurt you, but it wouldn’t launch you off the back like a treadmill might. Again, stay active, stay fit, but take a moment to think before you try an exercise.

What’s one thing you wished more of your patients (or the general public) knew about epilepsy?
Quality of life is critical; always remember that. You can have 100% seizure control, but if you feel miserable and sedated all the time, what good is it? You and your neurologist are a team. Work together, not just to control your seizures, but to optimize your quality of life.