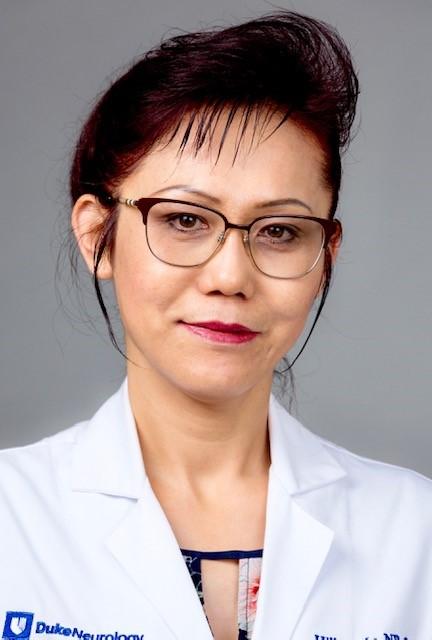 Migraine headaches, the most common neurological disorder in the United States, are especially devastating for women. Women not only make up three out of every four migraine sufferers, but their migraines last longer, have worse side effects, and are more intense. Fortunately, we know much more how and why migraines occur, and there are a variety of treatments can stop or reduce the effects of this disabling condition. For our next entry in our “Neurology and Women’s Health” series, Hillary Yu, NP-C, MSN, discusses the biological and cultural factors that make migraines so difficult for women. She also talks about the treatment options that are available, lifestyle choices that can make a difference for women, and the research at Duke that is investigating how to better understand and treat migraines.

What are some of the differences in how migraine affects women compared to men?
Migraine is the most common neurological disorder and is actually the seventh-leading cause disability worldwide. But it’s especially common among women--the American Headache Society estimates that women make up about 28 million out of the total of 37 million migraine sufferers in the U.S. In addition, women also have longer migraine attacks, and higher rates of relapse. Finally complications of migraine are worse for women than men--migraine puts women at a greater risk for a heart attack or stroke than it does men.

Why are women so much more vulnerable to migraine than men, both in frequency and in severity?
The exact reasons for these gender difference are unclear. However, numerous studies have examined how fluctuations in hormones may make women more susceptible to migraines. The frequency and severity of migraines in women are often associated with hormonal shifts such as during menstrual cycles, pregnancy, and menopause.

The pathophysiology of migraine has been explored for decades. The most popular migraine pathogenesis was the vascular theory that dominated thought for much of the 20th century. Since then scientists have found evidence that the pathogenesis is completely centrally driven activation. It involves dysfunction of brain-stem pathways that normally modulate sensory input, and the key pathway for the pain is the trigeminovascular input from the meningeal vessels.

Researchers have also found elevated levels of the chemical/peptide called CGRP (calcitonin-gene-related peptide in the external jugular venous blood of patients with acute migraine with and without aura. So CGRP has been implicated in the pathophysiology of migraine and CGRP-based therapeutics have been popular for the treatment of migraine in the current era.

How do symptoms of migraine differ for men than women?
For anyone, the typical symptoms of migraine include throbbing or pulsating head pain on one or both sides of the head. That pain can that last 4 to 72 hours, depending on whether a person is able to successfully receive treatment. Migraine pain can be moderate or severe in intensity, and is often accompanied by associated features of nausea and/or vomiting, and hypersensitivity to light, odors, or movement. Other symptoms include a visual “aura” (spots of light, zigzag lines, or graying out of vision), tingling and numbness, or language disturbances.

However, women tend to have have more frequent, longer-lasting, and more severe migraine headaches than men. The most consistent finding is that women report migraine attacks lasting longer, as well as more severe instances of sensitivity to light and sound, nausea, vomiting, and dizziness. Other symptoms such as vertigo and skin/scalp sensitivity are also more prevalent in women.

Women are also much more likely to have vestibular migraine, a form of migraines that also cause balance problems. Vestibular migraine are about five times more common among women than among men, and often appear as a complication of other forms of migraine.

Finally, there are also gender differences in variations associated with migraine. Among women, migraines are more likely vary significantly with age, with longer duration of attacks and increased intensity of associated symptoms in women above the age of 30 years, although they do not show such variation in men.

These differences sound very interesting, but we have to take them with a grain of salt since they’re typically based on reports from patients based on questionnaires or interviews. This reporting makes the answers vulnerable to bias from gender role expectations. For example, since men are less willing than women to report pain and to pursue medical attentions.

What kind of effects does migraine have on women’s lives?
Migraine is a large public health problem in both sexes and all age groups worldwide, though it is most common among young and middle-aged women. Women in these age groups face additional vulnerabilities because they often take on the demanding roles of mothers, spouses, independent workers, and caregivers for elderly parents. Those pressures could be that could be the extra trigger on top of the female hormone fluctuation and hypersensitivity to CGRP.

Migraine has affected many of these women’s families, social lives, daily activities, particularly in women with debilitating migraines. Chronic migraine sufferers are more likely to experience negative effects such as strains on personal relationships and detrimental disruptions to family life. The study also found the greatest burden of migraine was on the parent-child relationship and made an emotional impact on children. In general, the experience of migraine puts a severe burden on all members of the family. Women who suffer from severe migraine are also are significantly more likely to delay having children or have fewer children.

I have many patients who have complained that they were unable to attend their children’s birthday parties, graduation celebrations, and other important social and family events because of migraines. The debilitating/chronic migraine causes disability that account more effects in their family, society, and personal health with comorbidity including severe depression.

What can women do to treat, prevent, or cope with migraines?
Migraine it is not curable, but it can be controlled. Strategies for preventing and treating migraine include:

Non-pharmacological strategies including migraine diets, avoiding identified triggers, and lifestyle modifications such as getting enough sleep and regular exercise. Other options include neuro-cognitive therapy with meditation and biofeedback, which has showed great benefits for migraine sufferers with chronic comorbidity conditions. Women tend to have more sleep issues as well, with the lack of sleep also worsening migraine pain has been well recognized, so relaxation and preventing insomnia has to be addressed.

Pharmacological options to prevent migraines or stop them once they occur. There are currently four categories of prevention medications in the U.S. They are antidepressants, anticonvulsants, antihypertensive, and anti-CGRPs. Women of reproductive age should talk with their providers to discuss possible concerns for fetal and lactating safety. Contraceptives are an option to treat menstrual migraine but this method has not been successful for chronic migraine sufferers.

Other procedures include occipital nerve blocks, SPG, and Onabotulinum toxin A have also been established as an effective treatment for chronic migraine. Neuromodulation devices are also available which can prevent migraines or stop them as they’re occuring in some cases.

What effects do women’s hormone have on migraine? How do they influence when migraine happens and what it feels like?
As I have mentioned previously, female hormones play a major role in migraine pathogenesis. So migraine has significantly affected women’s life span starting puberty, experiencing monthly menstrual cycle, special periods of pregnancy, and getting through the changes in menopause. Some women may have more migraine during pregnancy, some may have less. Women are much less likely to have migraines after menopause, but certain women may experience new types of migraines after menopause.

What’s one thing you wished more women with migraine knew?
I think most women migraine sufferers seem to be knowledgeable about triggers, migraine diet, prognosis, and treatments including pharmacological and no pharmacological strategies. I call them “Dr. Googles.” However I have some good news to go along with the bad for those women: A cohort study in women with active migraine revealed that they had a lower risk of developing type 2 diabetes and a decrease in active migraine prevalence prior to diabetes diagnosis.

What’s being done within the Duke Neurology Department to help us better understand or treat chronic migraine?
As a clinician at Duke Neurology’s division of Headache and and Facial Pain, I work closely with supervising physicians Tim Collins, MD and Wolfgang Liedtke, MD, PhD who is specialized for face/trigeminal pain. We are proud when our patients report that their migraines have been reduced and manageable. They are able to do their daily activities, functions and enjoyed their family and social events

Regarding academic research, Dr. Collins was involved in the Alder phase III clinical study of their monoclonal CGRP antibody with intravenous formulary. Alder just applied for FDA approval this week this April and anticipates their product will be available to patients in early 2020.

For almost two decades, Dr. Liedtke has also been conducting research relating to the role of TRP (transient receptor potential – but can also be spelled as targeted relief of pain) in chronic pain. These calcium-permeable ion channels function in sensory transduction, that is translation of an external stimulus into a code that transmits along the nerve cell and through the “wires” of the central nervous system. TRP ion channels are also involved in pain, both normal, protective pain as well as pathologic, inappropriate pain such as migraine.

Dr.  Liedtke is interested increasingly to elucidate the role of TRPV4 in migraine and head-face pain, with dedicated focus on the female-male sexual dimorphism mentioned above. TRPV4 has also been shown to become sensitized in trigeminal neurons innervating the meninges, the “wallpaper” inside the skull that is the only intracranial pain-sensitive structure.

These findings are still at a more basic level, but with the recent advance in clinics of CGRP-neutralizing therapies the momentum is increasing for rationally-based therapies against chronic pain. After all, CGRP’s role in neurogenic inflammation dates back to the late 80s and early 90s. There is a justified expectation that the next round of successful translation of basic science insights into clinical pain medicine will be faster.

To me these findings are all very interesting even if they are abstract. I hope they will eventually lead to the development of new treatments for chronic pain including chronic migraine.