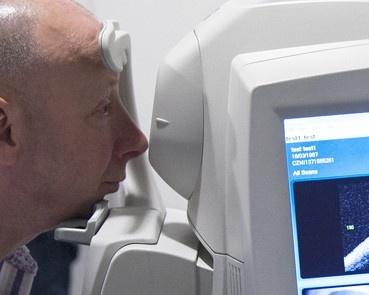 A growing global registry of deidentified multimodal retinal and optic nerve images may have important implications for the diagnosis and treatment of individuals with neurodegenerative disease.

The registry of images is part of the Duke Neurodegenerative Disease Retinal Imaging (DNRI) repository initiative, led by retinal surgeons Dilraj Grewal, MD, and Sharon Fekrat, MD. The housed images are being studied to assess whether they can function as a diagnostic tool, as using these images for diagnosis would be much less invasive, expensive, and time-consuming to acquire than current diagnostic methods. Through optical coherence tomography angiography and ultra-widefield fundus photography, researchers capture high-resolution images and evaluate individuals with dementia as well as those at risk for dementia.

“Because of the noted correlation between ocular pathology and select neurodegenerative diseases, imaging of the eye may assist clinicians in making a diagnosis earlier in the disease course and also create a baseline for comparison and future study,” Grewal says. “If we can diagnose Alzheimer’s earlier, we may be able to enroll patients into clinical trials earlier, with a more accurate diagnosis. At the very least, we can deploy lifestyle changes that may slow the progression of dementia.”

“If we’re able to able to diagnose a neurogenerative disease earlier and more easily with such ophthalmic images, it may help physicians and scientists ultimately find an effective treatment,” Fekrat adds.

The images of persons with neurodegenerative diseases contained in the DNRI repository are diagnosed by board-certified neurologists and include Alzheimer's disease (AD), mild cognitive impairment, Parkinson's disease, multiple sclerosis, amyotrophic lateral sclerosis, Huntington's disease, and multiple system atrophy, among others. Individual images from more than 800 patients currently in the repository are categorized according to diagnosis. The images are being studied by multidisciplinary and multi-institutional collaborators to determine whether these images may one day be used to make these diagnoses.

“As the prevalence of dementia grows as our society ages, we would benefit from finding better ways to identify people who have neurodegenerative disease and those who are going to develop it,” Grewal says. “Studying longitudinal images and observing changes in these images over time may have important implications with regard to studies of pharmaceutical interventions, as these images may be used to monitor treatment effect.”

Fekrat notes that one of the major areas of focus by pharmaceutical companies has been amyloid plaque, which has been associated with AD but does not automatically indicate such a diagnosis. “More than 400 clinical trials studying medications to lessen or remove amyloid plaque have failed,” she says. “Not everyone with amyloid has AD. Having the most accurate diagnosis is important when studying new medications.”

Among Fekrat’s and Grewal’s findings from data in the DNRI repository is that the loss of blood vessels in the retina is present in those with AD compared to cognitively healthy individuals, but Fekrat adds, “We have so much more work to do to be able to tell the difference among the various types of dementia using ophthalmic images.”

The biggest question is whether it is possible to diagnose a particular neurodegenerative disease by ocular imaging alone. Although this approach has not yet been validated, the use of artificial intelligence and deep learning is helping researchers begin to distinguish imaging patterns in order to assign a particular diagnosis.

In some ongoing projects, subsets of images are being used to train and test deep-learning models. One project is using images from a patient cohort that carries a gene that confers a higher risk of developing Alzheimer’s as well as images from a cohort that does not carry this gene. “If the model labels those with the gene as having AD, that will be a big step forward, since these individuals are currently asymptomatic. Being able to diagnose Alzheimer’s disease before symptoms start and enrolling those individuals into a clinical trial studying a novel therapeutic may have impact,” Fekrat says.

Since 2017, hundreds of thousands of individual images have been added to the DNRI repository, but researchers stress that many more are needed to draw clinically relevant conclusions that would change the current diagnostic paradigm. These images can also help further assess findings among different ethnicities and disease states and account for confounders such as diabetes and glaucoma.

"I think this is a very important observation with great potential," says Richard J. O'Brien, MD, PhD, a Duke neurologist who specializes in the treatment of neurodegenerative disease. "Important future work will be to determine if this technique can differentiate different types of dementia, and whether it can detect changes in those at risk rather than just those who are symptomatic."

To refer a patient who has been diagnosed with a neurodegenerative disease for ophthalmic imaging as part of this Institutional Review Board-approved study protocol, email dnri@duke.edu.

Socioeconomic factors appear to influence how brain injuries are treated

Novel approach to pain management could get the green light