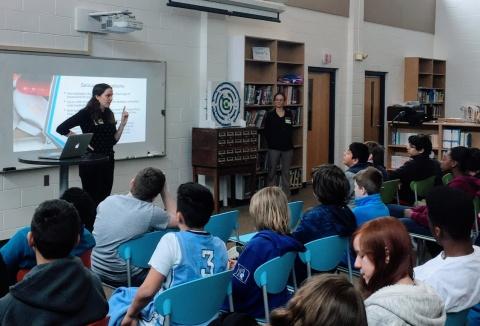 Durham middle school students got an insider’s perspective on the brain and how it works this week, thanks to a series of visits from the Duke Neurology Department. As part of their second annual Brain Awareness Week event, Duke Neurology residents and physician assistants led discussions at seven schools throughout Durham. This year’s discussions focused on epilepsy and seizures, from what happens inside the brain during a seizure, to how to spot a seizure and what they can do to help.

“[The discussion] was really informative,” said Ayanna Boyken, a seventh-grade student at the School for Creative Studies. “I learned a lot of things, like that there are different types of seizures, or how to stop people from hurting themselves if they have one."

Third-year resident Olinda Pineda, MD, (above) who organized this and last year’s events, kept a practical focus on the lessons, both to dispel the myths that exist around seizures and epilespy, and to encourage an interest in medicine. “It's important that kids in our community are exposed early on to medical issues. I'm hopeful it may even inspire some of them to think of a career in medicine,” Pineda said.

During the discussions students watched videos demonstrating different kinds of seizures, learned basic rules about how to react (call the emergency department if a seizure lasts for more than five minutes, make sure the seizing person is safe but not restrained, never put anything into a seizing person’s mouth), and had a chance to ask questions.

For second-year resident Maxwell Levy, MD, who led two discussions at Brodgen Middle School, the lessons were a two-way learning experience. “When I was in middle school, I'm sure I didn't really understand what a seizure was, let alone what to do if I saw someone having one. Learning about them  would have been something that I'd have been excited about, though.  Participating now as an educator allows me to pass that on to a new generation of learners,” Levy said.

Levy, above, answers questions during a visit to Brodgen Middle School.

“At the same time, I was surprised by how many kids volunteered that they or someone they knew had a seizure disorder. It really drove the point home that seizures were something they could watch out for, not just something confined to a guest speaker's talk,” Levy said.

Brain Awareness Week is a global campaign to celebrate the body’s most important organ and to improve awareness of the importance of brain research. Every March, scientists, doctors, teachers and other groups participate. Read more about Brain Awareness Week here.