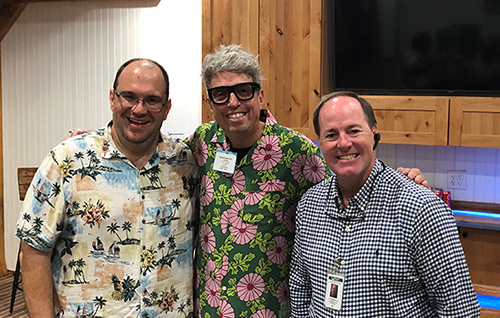 Amyotrophic lateral sclerosis (ALS) is a degenerative disease that leads to progressive weakness and ultimately death. As in so many diseases, the ripple effect of ALS is felt throughout a patient’s circle of support. Driven to make a positive change for other families, Duke’s ALS community is celebrating a significant milestone for future patients.

(This story first appeared on the DukeHealth website. Find that version of the story here.)

Led by three families who mobilized their personal networks and ultimately generated support from more than 500 donors, the Duke ALS community raised $3.5 million to establish the Stewart, Hughes, and Wendt Endowed Professorship in the Department of Neurology. This will be the first ALS Professorship at Duke University School of Medicine and one of only a handful of endowed faculty positions for scholars focused on ALS across the United States.

First established as a research fund, the professorship is named in honor of David Loy Stewart Sr., Larry Vance Hughes, and George C. Wendt, who lost their lives to ALS. The newly endowed fund will provide the future holder with dedicated time and resources to focus on ALS research.

Diagnosed with ALS in the early 2000s, David Loy Stewart Sr. set out on a personal battle to beat the disease and find a cure. He helped develop the South Carolina ALS Foundation and The Loy Stewart Foundation for ALS Research. In 2012, a fortuitous meeting between Stewart and George J. Wendt at an ALS baseball fundraiser sparked not only a new friendship but also a partnership. At that meeting, Stewart encouraged Wendt, who had recently lost his father, George C. Wendt, to ALS, to swing by the office to “pitch him an idea.”

The idea — finding a cure for ALS — included investing more time, energy, and resources into the Loy Stewart Foundation, which was already raising money and awareness and growing the ALS Association chapter in Charleston, South Carolina. Ultimately, Stewart and Wendt’s investigation into ALS research led them to Richard Bedlack, MD, director of the Duke ALS Clinic. “You either believe in Dr. Bedlack or you don’t,” Wendt says. “We believe in Dr. Bedlack.”

“We wanted to give families going through what we went through a fighting chance, a hope, a prayer,” says Loy Stewart Jr., son of honoree David Loy Stewart Sr. “ALS is not incurable; we just haven't found it yet, and we are honored to partner with Duke in attempting to prove exactly that.”

Duke's ALS Clinic is one of approximately 100 centers in the world dedicated to the diagnosis and treatment of ALS. With a hopeful and optimistic approach, Duke’s team collaborates to maximize the quality of life and life expectancy for people diagnosed with ALS. Bedlack says the endowment will help further Duke’s efforts to unlock the secrets of ALS and develop new therapies that can slow and perhaps even reverse the disease’s progress.

At the same time the Stewart family and Wendt were joining forces in South Carolina, Brett Hoge, of Winston Salem, North Carolina, was similarly motivated by his family’s experience with ALS. Hoge became a long-time supporter of ALS research at Duke through the Larry Vance Hughes ALS Foundation (LVH), established in 2014 to honor his stepfather, Larry, who was treated at Duke under Bedlack’s care.

When Hoge, who says ALS either breaks families apart or brings them together, learned of the Stewart and Wendt families’ similar mission, he enthusiastically joined their effort.

“We have been able to raise a couple of million dollars over the years doing fundraising events and concerts, but we always knew we would need help and get other families involved with the same passion to find a cure,” says Hoge.

In addition to the Stewart, Hughes, and Wendt families, others impacted by ALS joined the effort, resulting in hundreds of supporters who made the endowed professorship a reality. Among those are the Hardin family, the Moffitt family, Andrea Peet of Team Drea, and the Ragsdale family.

Sandra Mikush, a patient of Bedlack’s, along with her sister Dottie Holmes, brother Russ Hardin, and extended family and friends gave in memory of her father, Paul Hardin, who died of ALS, and in celebration of her mother Barbara Hardin’s 90th birthday by raising more than $140,000 from over 90 people in support of the endowed professorship.

“The ALS community is incredible,” says Mikush. “People touched by ALS — pALS (persons with ALS), caregivers, researchers, clinicians, family, and friends — are fierce and relentless in raising awareness and money, in participating in research trials and in changing policies. Time is not on our side, but we all feel that we are on the cusp of making breakthroughs that will improve the lives of people with ALS and their families.”

When ALS Awareness Month arrived in May 2022, the Hardin family offered a $50,000 challenge to raise $100,000 in support for the professorship. After receiving attentive and excellent care from the Duke neuromuscular team, Kay Moffitt was diagnosed with ALS by Dr. Bedlack. As soon as Kay and her husband, Bill, learned of the challenge, they immediately said, “You have your match, and we challenge the Duke ALS community to raise $200,000!” Their combined efforts culminated in more than 480 donors giving over $500,000.

Inspired by the mission that started with three families and motivated so many more, the innovative Duke ALS community has made a dream of an endowed faculty position a reality at the Duke ALS Clinic.

“The most remarkable part of this story is the fact that these families have not had the chance to meet, yet their compounding generosity and tenacious intentions helped Duke reach this significant milestone,” says Bedlack. “I am in awe of what they’ve accomplished.”

For more information, visit the Duke ALS Clinic. To learn how you can make a difference and support ALS research at Duke, please contact Director of Development Whitney Martin at whitney.w.martin@duke.edu or 919-451-3758.