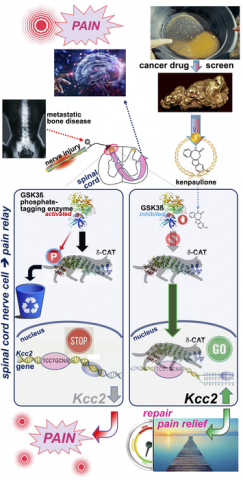 Several disorders cause chronic pain, including nerve injuries and bone cancer, but existing remedies can trigger uncomfortable side effects, or worse, addiction. So researchers from Duke University, including the Neurology Department's Yong Chen, PhD, and Wolfgang Liedtke, MD, PhD, and the University of California at Irvine teamed up to tackle this problem by searching for compounds that tackle pain in a new way—by targeting genetic switches that cause it.

The team screened a library of more than 1,000 compounds and discovered that an old, experimental cancer drug called kenpaullone enhances the expression of the gene KCC2, which is essential for silencing pain signals. The drug was effective in treating mouse models of pain from nerve injury and bone cancer, they reported in the journal Nature Communications.

The project started with a desire to find a medication that wouldn’t just mask pain, like over-the-counter drugs and opioids do. “Because chronic pain, like many chronic diseases, has an important root in genetic switches being reprogrammed in a bad way, a disease modifying treatment for chronic pain should reset the genetic switches, not just cover up the pain," said Wolfgang Liedtke, MD PhD, adjunct professor at the Duke Neurology Department and the Duke Cancer Institute, in a statement (Liedtke recently joined Regeneron, which was not involved in the study.)

Knowing that many cancer drugs influence the regulation of genes, the Duke/UC Irvine team screened 1,057 compounds in the “junkyard of cancer drugs,” two libraries held by the National Cancer Institute. They were specifically interested in compounds that enhance expression of KCC2, which is known for its ability to remove chloride from neurons, inhibiting neurotransmission in pain pathways.

They initially found 137 compounds that boosted KCC2 expression. Further testing narrowed the pool to four, including kenpaullone, which had been studied in preclinical models of various cancers but shelved.

The researchers went on to study how kenpaullone enhances the expression of KCC2. They discovered that it promotes a signaling mechanism that reactivates switched-off KCC2 in the cell nucleus.

In mouse models of nerve injury and bone cancer, injecting kenpaullone into the spinal fluid reduced behaviors indicative of pathological pain, the researchers reported in the study. In the mice with nerve injuries, the drug restored KCC2 expression, they added.

Manipulating genes to treat chronic pain is a popular pursuit. Earlier this year, researchers from the University of California, San Diego, reported that they used the gene-editing technologies CRISPR and zinc fingers to suppress a pain-promoting gene, producing durable pain relieve in several mouse models. They spun off a company, Navega Therapeutics, to further develop the therapy. Coda Biotherapeutics is also working on a gene therapy approach to chronic neuropathic pain.

(A version of this story by Anne Weintraub appeared in Fierce Biotech. Read that article here.)

The Duke/UC Irvine researchers noted in their new study that restoring KCC2 functioning could prove useful in other neurologic disorders, including spinal cord injury and epilepsy. The mechanism of action of kenpaullone and the signaling pathway they described “may represent a strategic bridgehead for therapeutics development,” they concluded.