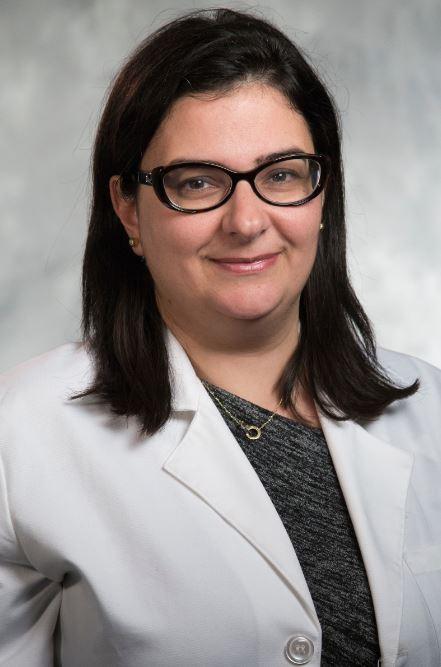 Stroke, a leading killer of men and women, kills twice as many women as does breast cancer. It also brings its own unique set of health concerns for women. At the most basic level, the symptoms of stroke differ between men and women, with women more likely to experience symptoms still known as "non-traditional" because they are less studied than the most common symptoms in men. In addition, women are both more likely than men to face complications of stroke and to bear the burden of caregiving for a partner or relative who has had a stroke. Fortunately, there is much that women can do, both to reduce their likelihood of stroke and, for women who experience a stroke, to reduce the impact stroke has on their lives.

For Women’s History Month 2021 Nada El-Husseini, MD, MHS, a vascular neurologist and associate professor of neurology at Duke, spoke to us about how stroke affects women, both directly and indirectly, across the lifetime. She also discusses symptoms and risk factors for stroke unique to women, and how future research can help us better understand and treat stroke in women. Finally she discusses ways that men and women can reduce their risk for stroke.

How much of a concern is stroke for women? What increases the risk of stroke for women?
Stroke affects about 1 in 5 women and kills more women than men. In the United States, stroke is as common in women as in men between the ages of 20 to 59 years, higher in men between 60 and 79 years of age  but is higher in women after the age of 80 years. Because women tend to live longer than men, they have a higher lifetime risk of stroke.

In addition, some risk factors are common in women and may affect women differently. For example, depression is a risk factor for stroke and is more common in women compared to men. Anxiety, stressful life events and high psychological stress are associated with an increased risk of stroke, more so in women than in men. Blood pressure is an important stroke risk factor but older women in particular are less likely to have their blood pressure under control suggesting potentially a disadvantage in awareness of treatment and control of blood pressure. Another stroke risk factor common for men and women is atrial fibrillation, however atrial fibrillation carries twice the risk of stroke in women compared to men and women are more likely to have more severe atrial fibrillation-related strokes.

In addition to common stroke risk factors such as increasing age, high blood pressure, diabetes, high cholesterol and atrial fibrillation, women have unique risk factors for stroke. These include age at first menstrual period (younger than 10 years or older than 17 years), use of hormonal contraception, pregnancy and menopause. Migraine with aura, more common in women, is also associated with a higher risk for stroke.

The following are additional details about these unique risk factors:

What symptoms do women experience when having a stroke? How do these symptoms compare to those of men?
Similar to men, women can present with typical stroke symptoms often summarized by BE FAST (sudden onset of Balance difficulty, Eye blurriness, Facial droop, Arm weakness, Speech difficulty, Time to call 911). Compared to men, women are more likely to present with “nontraditional” stroke symptoms which include: loss of consciousness or fainting, generalized weakness, shortness of breath, confusion, sudden behavioral change, agitation, hallucination, nausea or vomiting, pain, seizures, hiccups, headache, fatigue, disorientation, lightheadedness, generalized weakness, chest pain, palpitations feeling “funny” or a general sensation of “not feeling right.”

The acronym BE FAST can help you recognize a stroke in men and women.

Atypical symptoms may often not be recognized as stroke symptoms, and treatment may be delayed because of this. Time is always important when identifying or treating a stroke.

What differences, if any, exist between the severity and complications of stroke between men and women?
Women tend to have to have worse outcomes including higher rates of death after stroke when compared to men. A number of factors contribute to this: women tend to have strokes at an older age, and tend to have worse functional status at baseline, less of a social support system, and are more likely to have multiple comorbidities.

In addition to disability caused by weakness, paralysis, speech or vision loss, stroke can also increase the risk of osteoporosis and subsequent falls and fractures mainly of the hip. Stroke also commonly affects mental health and cognitive function. Pain, fatigue, depression, anxiety, change in personality, impaired memory and executive functioning can occur after stroke and some of these complications are more common in women.

In addition to their risk for stroke, women also act as caregivers for individuals who suffer a stroke. How does this burden affect women? What other indirect effects does stroke have on women’s lives?

Women represent about two-thirds of stroke caregivers. The stress of caregiving can cause harm directly and have numerous indirect downstream effects. Acting as a caregiver for an extended time may cause disturbed sleep, physical and psychological strain, increased social isolation, and a financial burden. Additionally, women often struggle with the feelings of losing the life that once was before their loved one had a stroke, coping with daily burdens and creating a new normal.

Women in that role may struggle to keep up with multiple family and work demands while trying their best to interact with healthcare providers to attain the best possible care for their loved ones. That may lead to getting less personal preventative health services and poor health, increased stress, lost wages from reduced work hours, time out of the workforce, passing up a job promotion or opportunity, family leave or early retirement or switching from full-time to part-time employment. These may add-up to previous similar compromises that a woman may have had to do when caring for her own children.

What can women do to reduce their risk of stroke?
Women should be aware of their own stroke risk factors and get modifiable risk factors such as hypertension or atrial fibrillation appropriately treated. They should avoid estrogen containing pills if they have cardiovascular risk factors or if they are older than 35 years of age and smoke cigarettes. They should avoid smoking cigarettes and avoid illicit drug use which are risk factors in both men and women. Physical inactivity tends to be more common among women than men and is a predictor of poor functional outcome after stroke. It is important for women to stay physically active and routinely exercise as this helps improve blood pressure and blood sugar and thus also helps with stroke prevention.

What can be done to improve how we treat, detect or research stroke among women?
Both treating physicians and the general public should know that symptoms of stroke in women are  different than in men and may not be the very typical symptoms that we think about when thinking about stroke.

We also need a better understanding of how men and women respond differently to therapies, especially for future drug development. Women continue to need greater representation in large clinical trials, and these trials should stratify data by sex so we can more fully understand the benefits and harm in women. We also need to develop and support systems of care that optimize supporting the post-acute care needs of women as stroke survivors and caregivers.

What’s one thing you wished more women knew about stroke?

Stroke kills twice as many women as breast cancer. The good news is that 4 in 5 strokes are preventable. Women should know their individual risks for stroke and take action to reduce these risks. Recognizing and responding to symptoms of stroke quickly is critical. Treatments for stroke exist but they are very-time dependent and more likely to work if received very quickly after stroke symptoms start.
In addition to recognizing stroke, prevention is very important and should be the goal for everyone. However, it is also important to know that for the many women who survive a stroke, interventions after the acute treatment, such as intensive therapy and treatment of anxiety and depression help to optimize recovery and quality of life.

"We need a better understanding of how men and women respond differently to stroke therapies, especially for future drug development. Women continue to need greater representation in large clinical trials, and these trials should stratify data by sex so we can more fully understand the benefits and harm in women."