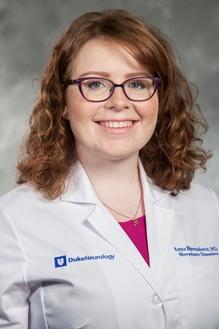 Not all neurological diseases pose a greater risk for women. For Parkinson’s disease, women are less likely to develop the diseases and usually do so at a  later age. Still, Parkinson’s and other movement disorders pose unique concerns for women, including lower access to home care and a higher risk for some side effects. In our final entry in our Women’s Health and Neurology series, Anna Bjornsdottir, MD, discusses possible reasons for these discrepancies, which range from different environmental exposures between men and women to possible neuroprotective effects of estrogen. She also discusses concerns about movement disorders during pregnancy and the biggest unanswered questions about movement disorders for men and women.

Why are women less likely to get Parkinson’s disease, and why do they seem to have less severe symptoms?
For every two women, there are three men diagnosed with Parkinson´s disease.  Women also present on average about two years later with their symptoms. The reason for this difference is largely unknown but some pre-clinical data suggests neuroprotective effects of estrogens within the striatal dopaminergic system.

There might also be a difference in exposure to environmental factors amongst men and women which may contribute, such as traumatic brain injury and exposures to pesticides that are associated with increased risk of PD while cigarette smoking and caffeine are associated with decreased risk. Interestingly women are at a higher risk of developing dyskinesias [involuntary muscle movements] as a side effect of levodopa treatment, but they are less likely to undergo DBS surgery which is generally the best way of treating dyskinesias. They are less likely to develop cognitive impairment but nevertheless more likely than men to use long-term care facilities. This may be in part because fewer women with Parkinson’s disease have access to caregiving support from spouses and have a faster rate of using a paid caregiver, as shown in a recent study published in Neurology.

What are the most common movement disorders in pregnancy?
Restless legs syndrome (RLS) has been reported in up to a third of pregnant women. Women that have RLS during pregnancy have a fourfold increase in risk of developing RLS later in life. Treatment usually consists of iron supplementation in case of iron deficiency since the safety of conventional treatment for RLS has not been established in pregnancy.

Chorea gravidarum is simply a chorea that presents during pregnancy.  In the past the most common cause was Sydenham’s chorea but with increasing use of appropriate antibiotics for group A streptococcal infections, systemic lupus erythematosus and the presence of antiphospholipid antibodies are the most common cause. This form of chorea seems to be triggered by increased levels of estrogens during pregnancy and can also be seen with oral-contraceptive use. The treatment is focused on the underlying issue, and most cases resolved on the third trimester or within a few weeks after delivery.

Fortunately, the incidence of Parkinson’s disease amongst women of childbearing age is very low. The safety of the dopaminergic agents in pregnancy are not well established, currently carbidopa/levodopa is category C.

The fact that women with Parkinson’s disease have greater difficulties finding a caregiver within their family or support network and need to turn to a paid-aide or nursing facilities sooner than men is puzzling to me. The support network around a patient with Parkinson’s disease is essential for the patient’s quality of life, so it is of great importance to try understand this disparity.