Our Commitment to Equity, Diversity, and Inclusion

The Duke University Department of Neurology recognizes that a diverse, inclusive, and equitable community – including clinicians, researchers, trainees, leadership, and staff – is a necessary component of its mission of world-class patient care, education, and research. Our department is committed to building and maintaining a diverse and inclusive community where all members thrive in a welcoming and engaging environment.

Our efforts to improve and maintain equity, diversity, inclusion are built on self-assessment,  accountability, and transparency. The foundation of this approach is self-assessment to understand the people of our Department, gauge our successes and areas for improvement, and guide future efforts.

In 2020, our Diversity and Inclusion Committee drafted a census to learn more about the demographic breakdown, beliefs, and preferences of our Department. The anonymous survey included questions on job titles, race, gender, sexual orientation, time spent in our Department, outside interests, and more. 259 members of the Department responded to the Census, which was a response rate of approximately 86%. 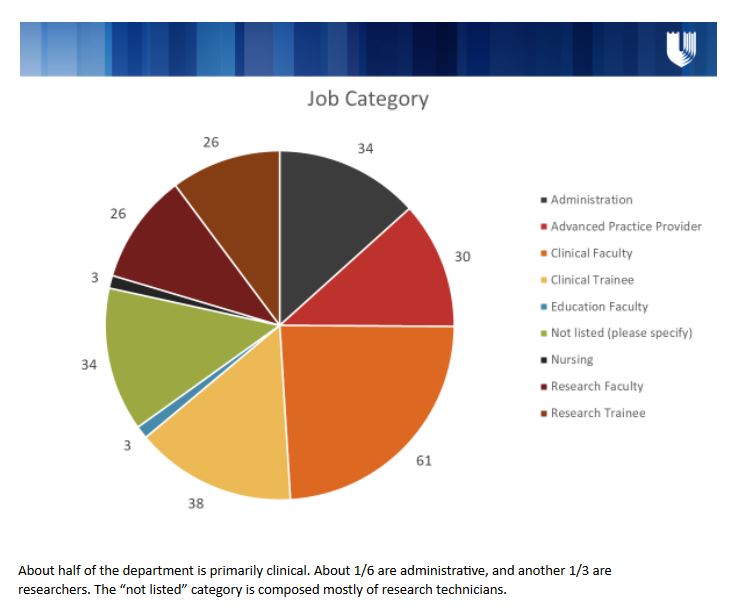 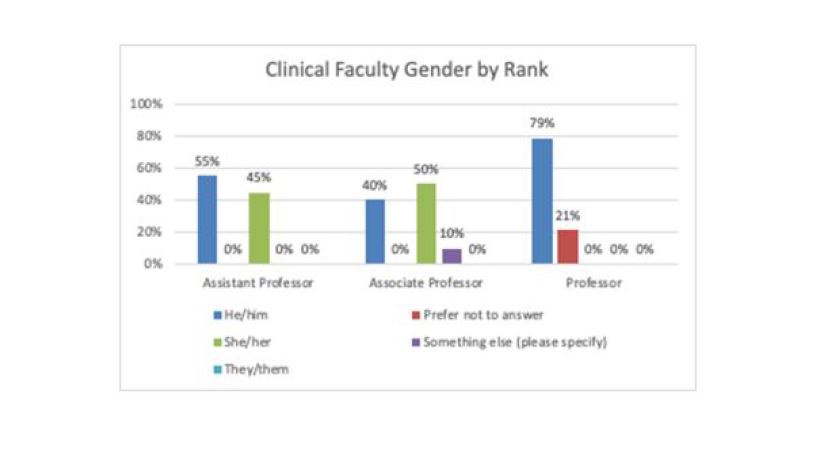 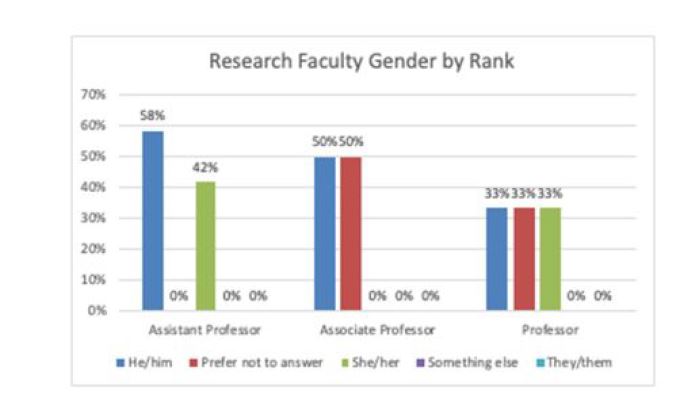 The Department Census revealed many ways our Department is diverse, such as our family backgrounds, outside interests, languages spoken, and religious identities, but revealed other aspects of the Department where diversity is lacking, most notably with race. For example, at the end of Financial Year 2019, Duke Neurology employed 1 Hispanic and 0 Black clinical neurologists, well below the national averages. The national average for women on faculty in academic neurology departments is 30%; Duke is slightly higher than this average but still well below 50%. Duke Neurology also has very few members who identify as non-binary or prefer pronouns other than he/him and she/hers.

The Duke Neurology Department maintains an online archive of our grand rounds speakers from 2016 to the present. This archive of our main educational activity for faculty, staff, and trainees contains more than 200 lectures. For our Speaker Analysis, an analyst viewed recordings of these lectures from 2016 to 2019, noting the gender and race of each speaker (this analysis should be interpreted with caution as race and gender are self-identifiable traits that cannot be determined without asking the individual; however, this imperfect method remains a good starting point for a preliminary analysis). We then analyzed this data for both guest speakers and lecturers within our own Department. 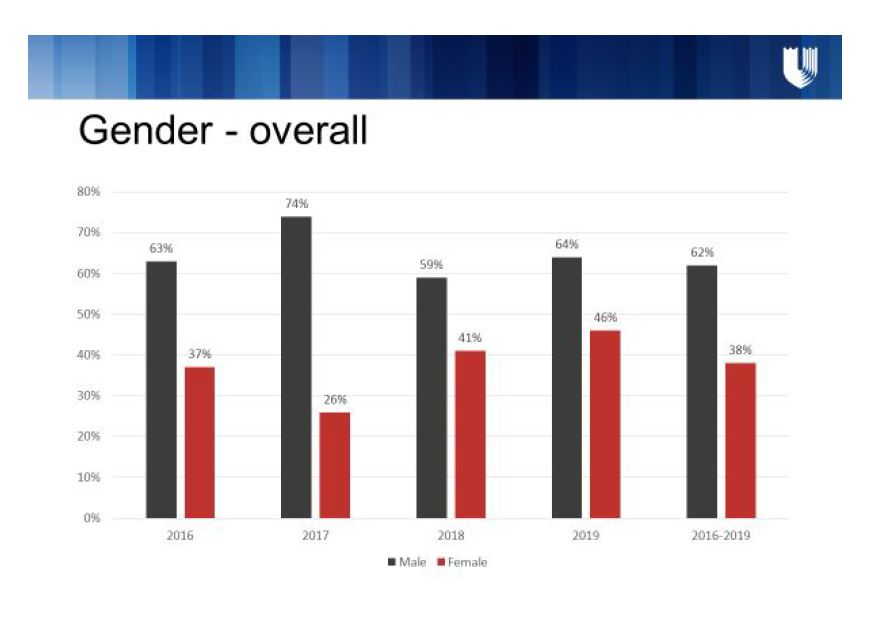 The gender analysis of Grand Rounds speakers indicated that men and women from Duke speak in proportion to their numbers in the department (62%-38%). When outside speakers are invited, women and men speak at a rate much closer to 50% each. The racial analysis of Grand Rounds speakers among Duke speakers is again proportionate to the rates in the department (72% White, 23% Asian, 5% Black/Hispanic/Native American). Duke Neurology did not invite a guest speaker from a traditionally underrepresented racial group to speak at Grand rounds between 2016-2019.

As a result of this analysis, the Duke Neurology Department has increased the number of invited speakers from underrepresented in medicine groups for 2020 and will continue to make inviting speakers from these backgrounds in the future. We have also broadened diversity of our grand rounds speakers by inviting advanced practice providers (APPs), physical therapists, pharmacists, and other clinical exeperts to deliver lectures starting in FY 2021.

In 2017, Duke Neurology Residency Program redesigned the process by which it selected applicants for interviews based on 2016 data indicating that a heavy reliance on USMLE Step 1 scores was biasing our interview pool in favor of White and Asian applicants. The revision placed more emphasis on grades and letters of recommendation as part of a holistic review of the entire application rather than utilizing a Step 1 minimum cutoff score. The de-emphasis on Step 1 scores was subsequently validated by the USMLE deciding to discontinue numeric scoring of Step 1 in favor of pass/fail results in 2022. The residency continues to track the relative proportion of candidates from underrepresented racial groups that are offered interviews. The absolute percentages vary due to the variability in the number of applications received each year. The residency remains successful in offering interviews to similar proportions of applicants from different racial groups.

The residency offered interviews to approximately the same percentage of applicants from under-represented and non-under-represented backgrounds for the third consecutive year, validating the holistic method of reviewing applications adopted in 2017.

The current and former directors of our Diversity and Inclusion efforts, Andrew Spector, MD, and Kenyon Railey, MD, summarized these efforts in a 2019 article in the Journal of the National Medical Association, "Reducing Reliance on Test Scores Reduces Racial Bias in Neurology Residency Recruitment." Read that article here. 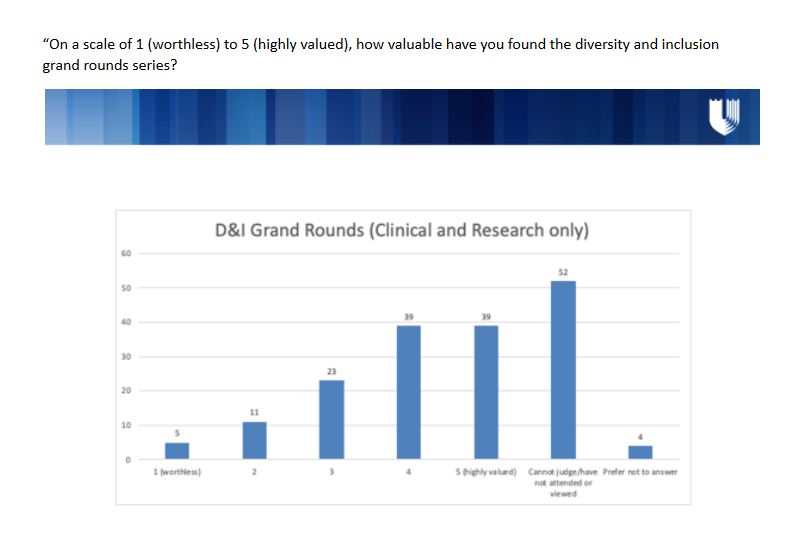 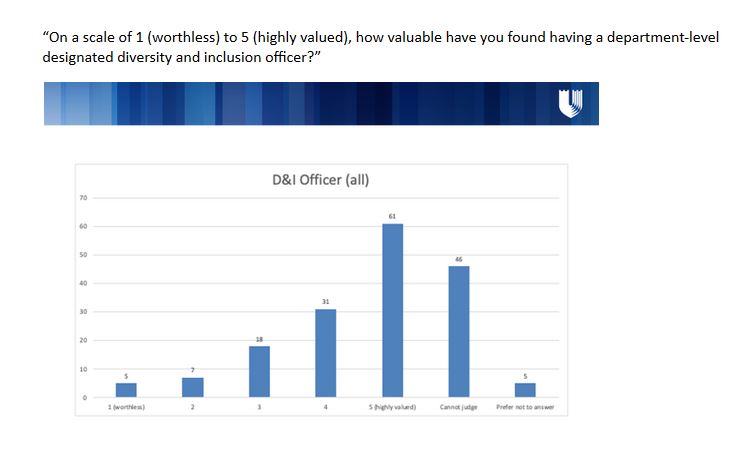 Areas for further work in the future include a modest but significant gender gap in faculty satisfaction (with women more likely to be dissatisfied). Department members in their 20s and 30s reported the most disrespect based on age. The Department Chair and Diversity and Inclusion Officer were generally given high marks for commitment to diversity and inclusion and value to the department, respectively. The Diversity and Inclusion Grand Rounds Series and the diversity and inclusion monthly emails were both highly rated endeavors.

The Diversity and Inclusion Committee’s 2022-2023 theme will be “Empowerment.” Highlights of our priorities and projects during this year include: